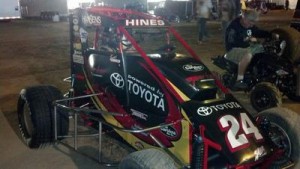 From Tracy Hines Racing PR
New Castle, IN — (November 17, 2013) — Racing in both the midget and sprint car portions of the 46th Annual Sands Chevrolet Western World Championships presented by the Racers Advantage Store at Canyon Speedway Park in Peoria, Ariz., afforded Tracy Hines twice as many laps on the racy one-third-mile, and the ability to try a few different combinations and lines to prepare for the final night. That plan of attack helped the veteran driver finish fourth in the main event for the Honda USAC National Midget Series and come home fifth in the USAC Southwest vs. USAC West Coast Sprint Car Series event.

Hines competed in a total of five feature races over the course of the three-day event, earning four finishes of sixth or better. He picked up three top-five finishes, highlighted by a runner-up performance in the sprint car portion of the event on the second night.

On the final night of the Western World Championships, Hines worked his way from the seventh starting spot to finish fourth in the Parker Machinery/Powered by Toyota Spike with the Honda USAC National Midget Series. He gained a spot on the opening lap and was up to fourth by the fourth circuit, following a trio of early cautions. Hines would continue to run fourth for the remainder of the 30-lap main, en route to his 11th top-five finish of the season with the series.

The finale of the sprint car portion of the Western World Championships on Saturday, Nov. 16, found Hines starting on the pole in Rick Pollock’s No. 21. R.J. Johnson took the lead at the start from the outside of the front row. After eventual winner Bryan Clauson got around both for the top spot, Hines ran third for a number of laps. The final caution flag of the race flew at the halfway point, with Hines running fourth. He would fall back one spot in the late going to finish fifth.

With a split field for the sprint cars at the Western World Championships, Hines was in action on Friday, Nov. 15, for the second qualifying night. He would finish second to Clauson, who started on the pole and paced all 30 circuits of the race. Hines started on the outside of the front row and took the lead on the initial start, only to have the caution flag fly before that lap was completed. He shot to the lead on the second start as well, before Clauson got by him on the back straightaway.

During a long green flag stretch of racing in the second half of the contest, Hines would move back into the runner-up spot, after falling to third in the early going. Hines would hold off Jon Stanbrough for second at the line to lock himself into Saturday’s finale.

Also on Friday night, Hines was in action for the second preliminary night for the Honda USAC National Midget Series. He finished 13th in the main event, which paired with sixth-place showing on Thursday night earned him enough event points to secure a spot in the eight-car dash on the final night, which determined the first four rows for the A-Feature. Hines timed in 12th quickest to open the night and finished fourth in the fourth heat race to transfer to the preliminary feature, where he took the green flag in 12th.

Hines opened the Western World Championships on Thursday, Nov. 14, with the Honda USAC National Midget Series, finishing sixth in the 30-lap main event. He lined up on the outside of the third row for the preliminary feature and ran in that position for the first few laps, which saw the red flag fly on the opening circuit, necessitating a complete restart, with the first caution of the night being displayed on the fourth lap.

The veteran driver moved into the top-five near the mid-point of the 30-lap contest and ran as high as fourth in the latter stages of the race. He would end up crossing the finish line in sixth. The native of New Castle, Ind., opened the night by setting a new track record in qualifying. Hines finished third in the first heat race to earn a spot in the preliminary feature.

Hines, who is currently fourth in points with the Honda USAC Nationals Midget Series, will wrap up the season on Thanksgiving night at Perris Auto Speedway in Southern California, with the running of the annual Turkey Night Midget Grand Prix.