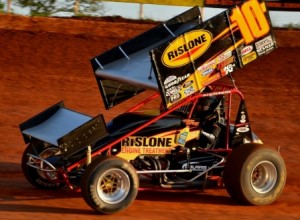 May 2nd – Seymour, TN – Ten-time United Sprint Car Series presented by K&N Filters Terry Gray, from Bartlett, Tennessee, took the lead from K&N Filters Pole Position starter Eric Riggins, Jr. from Charlotte, North Carolina on Lap 15 of the 30-lap “Thunder in the Smokies” Round #1 USCS filtercharged by K&N Filters main event on Friday night at 411 Motor Speedway and never looked back, masterfully skirting lap traffic over the final 14 laps to extend his lead and roll into www.rockauto.com Victory Lane. The win was Gray’s first USCS win of the season and came after a massive opening lap crash that saw one of last week’s winners and his teammate Morgan Turpen flip wildly into the catch fence in turn three.

“This one means a whole lot tonight,” Gray said after the race to the crowd that stayed around for the finish. “Especially after what happened to (Morgan), I wanted to win this bad for her. For both of us, really. I lost one earlier this season at Hohenwald (Tennessee National Raceway) and I wasn’t gonna let that happen again.”
Speaking of his teammate, Gray expressed how thankful he was not only that Turpen was okay, but that she came back to cheer him on after her race-ending incident. “She’s a tough customer,” Gray said of his longtime teammate. “She’s been through a lot tonight, but I’m glad to have her around here, and real glad she’s okay. She took a hard spill.”

That spill was sparked after fourth starting Turpen and the high passing point’s leader Lance Moss who started sixth were battling hard for position on the opening lap behind Riggins. Jr., Gray. The pair went into Turn 3 and made contact spinning Turpen’s10M around and launching her into the catch fence in front of the majority of the whole field. Both Moss and Turpen’s cars came to rest between turns three and four. Moss climbed out okay, but, Turpen had to be more gingerly extracted from her car complaining of knee pain and a sore neck, but she was able to exit her car with minor assistance and spoke after the event about her wild ride.

“I don’t remember a whole lot, to be honest,” Turpen said following the feature. “I just remember sailing it down into turn 3 and then the next thing I knew we were in the air. I just thought to myself, ‘oh, this is bad’ and then we were pinned against the concrete wall.” “I’m sore right now; my knees are pretty banged up, and I want to get my neck checked out,  but if Terry can get the car fixed and we’re cleared for tomorrow, we’re gonna do our best to race. I want to as long as I can,” a steely Turpen added.
Numerous other cars were involved in the fray, with six of the starters being unable to return after a more than half-hour long red flag halted the racing action for extensive cleanup. In addition to Turpen and Moss, Shawn Murray, Terry Witherspoon, Greg Merritt, and Ray Bugg were collected in the melee.

After the red flag, 14 cars re-took the green flag for a complete restart and pole starting Eric Riggins, Jr. again leaped out in front of the field, to leadthe first half of the event before Gray came calling at the halfway point to snatch the top spot away and collect the $2000 top prize.

After a caution at lap 16 for the spinning car of rookie driver Lukas Smith, Gray surged back to the point on the restart and held off the charges of fellow Bartlett, Tennessee native and 2008 USCS Rookie of the Year Anthony Nicholson over the final fourteen laps to take the trophy and the checkered flag. Nicholson finished in second, with Cherryville, North Carolina’s Johnny Bridges charging into the K&N Filters Podium Award third place after starting fifth. Former World of Outlaws STP Sprint Car Series winner and Midwest sprint car star Danny Smith (Chillicothe, Ohio) came home in fourth and Eric Riggins, Jr. completed the top five at the finish.

Gray kicked off the evening’s racing action by winning the six cars, six-lap USCS Hoosier Speed Dash. His teammate Morgan Turpen then won the Engler Machine and Tool First Heat. Johnny Bridges charged to victory in the Butlerbuilt Second Heat, and Lance Moss came from dead-last to take the win in the Schoenfeld Headers Third Heat. After first heat winner Turpen pulled a six in the inversion draw, Eric Riggins Jr. started the main event from the K&N Filters Pole Position. Brandon McLain advanced the most positions (six) in the A-Main to earn the Wilwood Disc Brakes Hard Charger Award.