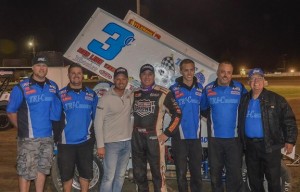 “We had a bad fast racecar all weekend long, and we are moving forward after not having the best start to the year in the world,” Allard said.

Setting the tone early at the Ocean Speedway on Friday night, Allard was the fastest qualifier, and went on to finish third in heat race action.

Pulling the one pill in the Top-Eight redraw, the Chico, CA was hard on the throttle when the race came to life, and was never seriously challenged aboard his Tri-C Manufacturing/K&N/ButlerBuilt entry.

When 24 cars on the starting grid, Allard quickly found himself in lapped traffic, but as he used the top of the speedway, he was able get through slower cars with ease, as he put lapped cars between himself and the second place car.

The only thing that seemed to slow Allard was a lap 27 caution, but he was strong on his restart, and went on to capture his first career Ocean Sprints Presented By Taco Bravo win.

“I can’t say enough about my guys,” Allard said in victory lane. “We had a rough time in Marysville last weekend, and they worked hard, and we were really good last Sunday night, and even better here at the Ocean Speedway.”

Saturday night, Allard returned to action with the Civil War Series presented by Flowmaster, and he looked to keep his momentum rolling, but it took a brief hit, as he timed in poorly as he went out late for time trials, putting him behind the inversion.

Up on the wheel in heat race action, “JA” worked his way to the third spot, and transferred directly into the feature event, though he started in the 17th spot.

With time trials not being indicative of how strong Allard was, he flexed his muscle in the feature event, as he worked right through the slick middle of the speedway, and clawed his way toward the top-five.

Pushing the limits a little too much in the slick, Allard lost the handle on his machine, and spun on the 20th circuit, while running in the seventh spot.

Restarting at the rear of the field with 10-laps to go, Allard was able to claw his way back to a 10th place finish.

“Driver error cost us in the feature event at Placerville,” he admitted. “Unfortunately in time trials there was not a ton of race track left, and we missed the inversion. Our car raced very well, and we got through our heat, and were coming through the field, but I pushed a little too hard, and gave up a ton of track positions, but to come back up to 10th in 10 laps, shows how strong we are, and how we are progressing and gelling.”

ON TAP: Allard and his team will now pick back up with the King of the West Series as they invade the Silver Dollar Speedway on Friday night, and the Marysville Raceway Park on Saturday night.