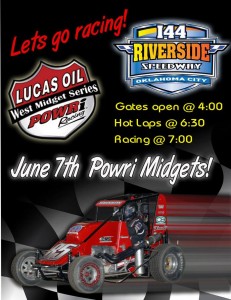 Which creates a three set wingless serving of the highest order over the next five weeks as POWRi West Midgets will now invade southwest Oklahoma City this coming Saturday, followed by thunderous appearances on June 21st and July 12th.

The coming serving this Saturday holds high promise to be the best yet as approximately 22 teams have confirmed their entries for this weekend’s outing.

While we wish glory for our West reps in National action, focus swiftly shifts back to the premier open wheel event in the region this weekend and the warriors assembling for the showdown at OKC Corral.

Choctaw’s Cody Brewer enters third in points and with an April 26th POWRi West score at I-44 to his credit. Brewer’s proven mettle will be on high display in the Chevy powered Napa Auto Parts #96 Spike Chassis this weekend.

Bixby’s Kevin Bayer has been a force to be reckoned with, leading laps in four separate POWRi West main events this season, but a win still eludes the Ecotec powered JET Motorsports #91B. Bayer enters Saturday’s Showdown fourth in West points.

The balance of the field is incredibly deep with Guthrie, Oklahoma native, but Oklahoma City fan favorite Michelle Decker entering Saturday’s action sixth in West points. A three-time sprint car champion at Oklahoma City’s State Fair Speedway, Michelle has improved her finish in each of the three West contests at I-44, most recently placing 4th in the Esslinger powered Royal Purple #4m Spike Chassis back on May 10th.

If descriptions continue for each entrant, this will achieve encyclopedia status. Hurricane Hannah Adair will continue her impressive rookie campaign, and be joined by series promoter and Jenks, Oklahoma resident Eric Fenton who recently earned the Factor One Racing Hard Charger Award on May 10th when he took his Chevy powered Southside Mowers #14E from 14th to sixth. Yes, better mention the boss!

The Sooner One Racing #1ou Midget will be on hand, not sure yet of pilot as OU Engineering student, by way of Running Springs, California, AJ Burns is out west. Lawton, Oklahoma’s Brandon Boggs piloted the Sooner One Racing entry back on April 11th at Creek County (Sapulpa, Oklahoma), and should be a likely favorite to do so once again as the University of Oklahoma Freshman has a non wing micro win to his credit at I-44 Riverside this season and is leading points in that class, as well.

Piedmont’s Grady Chandler will join west side forces also. Chandler has multiple wins in micro sprint action at I-44 Riverside and made his Midget debut on May 10th, turning in a highly impressive run from 13th to finish 8th. Look for the young 14 year old to make some noise this Saturday.

A slew of competitors aim to make their POWRi West debuts this Saturday, led by Olathe, Kansas’ Tyler Nelson. It will be young pilots’ return trip to OKC since he competed in Midget action there for the first at the Inaugural Twister Nationals last October.

Atoka’s Austin Shores will make his POWRi West debut, while chance remains that Anadarko’s Ryan Padgett will as well.

If micro sprint standout Tucker Klaasmeyer makes it down the Turnpike, then add a Show Me State rep to the roster. Hopes are with Tucker that they solve some recent rear end woes.

Come out this Saturday to see the stars of the Lucas Oil POWRi West Midget Series on full display this Saturday night at OKC’s I-44 Riverside Speedway.
General admission is $12, pit admission $20. Gates open at 4pm, hot laps at 6pm, with POWRi West driver introduction following conclusion of hot laps and an official program start time of 7pm.

The Lucas Oil POWRi West Midget Series extends our heartfelt thanks to our partners that have supported us in becoming the premier wingless open wheel series in the region, special thanks to Factor One Racing, Fenton Graphics, Boss Chassis, MudX, Rod End Supply, KBR Performance, Tulsa Gas Technologies, The Dirty Knuckle Tavern, and of course our premier sponsor Lucas Oil.

For more information regarding I-44 Riverside Speedway, check em out on Facebook or at www.i44riversidespeedway.com

THE Lucas Oil POWRi West Midget Series extends an invitation to all sports fan who are open to an action packed night of high speed, wheel to wheel entertainment that is fun for the family and all ages!

When the engines comes to life, we hope to see you there!