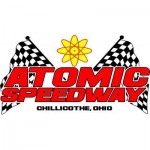 Chillicothe, OH — (March 17, 2015) — Atomic Speedway, dubbed “The Midwest’s Fastest 3/8 Mile Oval” will kick off the its racing campaign Friday, March 20 when the nations’ most prestigious late model series–The Lucas Oil Late Models–kick off the first race of the 2015 campaign north of the Ohio River. Tagged as the “Buckeye Spring 50”, this race kicks off a star-studded slate of twenty six races in 2015 at the fabled dirt racing facility. Open wheel modifieds are also on the racing card.

The race is the first of two huge weekends to kick-off the 2015 racing season–The second event is Saturday, March 28th, when the University of Northern Ohio (UNOH) All Star Sprints invade Atomic paying $10,000 to win. Late Models and Sport Mods will also be on the race card. Tony Stewart, NASCAR star, purchased the All-Stars over the winter. Stewart just might be on hand to see the first official points’ race under his ownership.

Some of the biggest names in auto racing, both within and outside the Lucas Oil series and barnstorming outlaws will join forces with the region’s best racers this Friday, where fair skies and mild weather are forecast for a great night of racing.

Drivers that compete on the Lucas Oil series in 2015 will be vying for the coveted series championship that will pay $75,000 to the champion, along with a $10,000 prize to the LOLMDS Rookie of the Year. Friday’s race at Atomic will pay $10,000 to the winner. The top 15 drivers in the series, often credited as the top 15 in the nation, are slated to be on hand to compete for a spot in the 26-car field.

Atomic Speedway would like to remind all drivers about our points’ system.The points’ championship includes every race on the schedule. On special events the top regular drivers earn points as to how they finish. If the first two local drivers finish 9th and 10th in a sanctioned show like the Lucas Oil event, they would then receive 1st and 2nd place Atomic points for the evening. The object is to involve our local supporting race teams in every event and reward them with points in this manner. Also AMRA points DO NOT start until April 1 so the March shows are not sanctioned and will not need an AMRA license until April 1.

For the latest breaking news about the Lucas Oil Late Model Dirt Series, including the 2015 tour schedule, TV schedule, drivers, sponsors and all the information about the series, visit the official website at: www.lucasdirt.com.