“The car count was a little lower than we expected, but it feels good to get another win under our belt,” he said. “This is a better start to the season than we’ve had the last couple of years.” 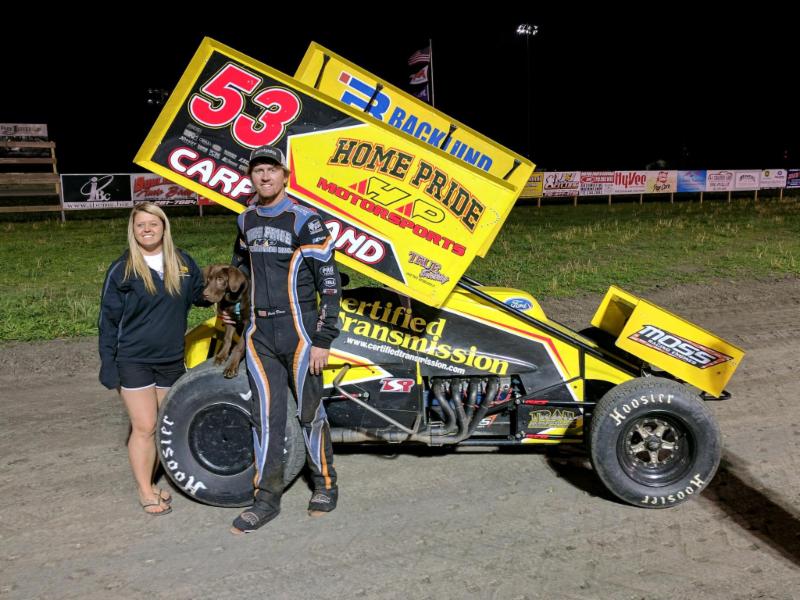 Dover kicked off the night by qualifying second quickest. He then posted a runner-up result in a heat race.

“We were way too tight in qualifying,” he said. “In the heat race we were leading going into turn one and I overdrove it into the corner and fell off the edge. I restarted at the back and came up to second.”

Dover then drew the No. 4 during the feature redraw to start the main event on the outside of the second row.

“We were supposed to start fourth, but the guy who was supposed to start second dropped out so we moved up,” he said. “We took the lead and checked out on the start. The track was real slick so we wanted to try some stuff. It actually worked so we learned something from the night.”

Dover led the distance to record his seventh win in the last 10 races at Park Jefferson International Speedway.

The weekend began last Thursday at Lakeside Speedway in Kansas City, Kan., where Dover picked up a position to finish fourth in a Lucas Oil ASCS National Tour heat race. That sent him to the B Main, which he won to lock into the 18th starting position in the main event. He then rallied to finish 13th.

“We had the car too tight,” he said. “We could still move forward. I think we would have been way better if the car wouldn’t have been too tight. We should have known the moisture was going to come back up because the track is close to the river. Everyone wasn’t expecting it to be that good in the feature. Most nights the track will start blowing off after 10 laps. It wasn’t the finish we wanted, but every time we went on the track we moved forward so that’s a plus.”

Dover has a busy weekend on tap beginning on Thursday at U.S. 30 Speedway in Columbus, Neb., where he will drive a 305ci winged sprint car for Chris Roseland during a Sprint Series of Nebraska show. Dover will return to his 360 sprint car on Friday at Rapid Speedway in Rock Rapids, Iowa, with the MSTS Series before capping the weekend on Saturday at Junction Motor Speedway in McCool Junction, Neb., with the Carpet Land Nebraska 360 Sprints.

Moss Racing Engines manufactures Ford racing engines. The company was started by Chris Moss, who worked under the Roush Yates Racing Engines banner before creating his own company in 2013.

“You can call Chris any time of the day or night and he’ll help you,” Dover said. “The engines are reliable. He hasn’t had any engine failures so that says a lot for his name and product.”