– JEFFERSON, S.D. (June 20, 2017) – Jack Dover is riding one of his hot streaks as he posted his seventh triumph in the last 12 races on Saturday at Off Road Speedway in Norfolk, Neb.

Dover has won at least once during five of the last six weeks he has competed. 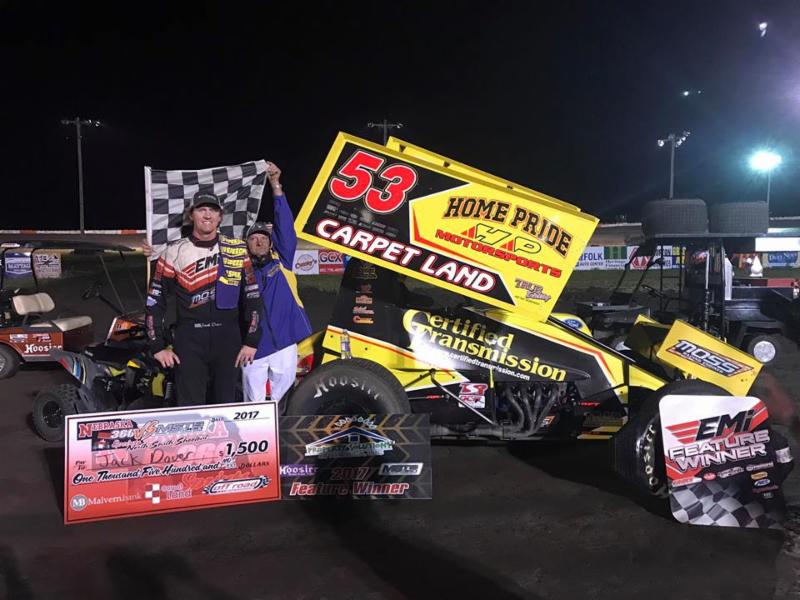 “We looked at where we were this time last year and we only had two wins,” he said. “We just have to keep the momentum up and I think we’ll reach our goal of 20 wins.”

The team ventured to Off Road Speedway on Saturday, when they advanced from third to second place in a Carpet Land Nebraska 360 Sprints heat race. That earned a spot in the feature redraw, in which Dover pulled the No. 1 to start the main event on the pole.

“We tried some new stuff and we were too aggressive,” he said. “The car was good, but it wasn’t working exactly how I wanted it to. We had it too tight and I couldn’t rotate the corners like we needed to. Jason Martin slid me with two laps to go. I knew he’d done it too fast. I drove under him and never looked back.”

The win was Dover’s third in the last five races with the series.

The weekend wrapped up on Sunday, when Dover drove a 305ci winged sprint car for Chris Roseland during the Sprint Series of Nebraska show at Raceway Park.

Dover won a heat race after starting third to make the feature redraw. He then pulled the No. 2 to start the main event on the outside of the front row.

“We didn’t have the car tight enough,” he said. “It was one of the most boring races I’ve been in because it was right around the bottom about 20 miles per hour. We ran second for the first five laps. I tried a different line to see if my car would handle better and got passed. We got back down to the bottom and held on to where we were and finished as good as we could.”

Dover earned a third-place finish, which was his 10th podium of the season.