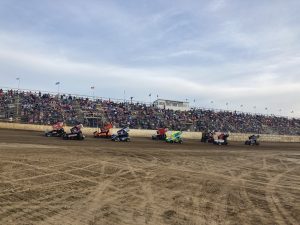 • Until Saturday night it had been eight years since I set foot on the grounds at Butler Motor Speedway. It had likely been closer to 20 since I looked forward to covering a race at Butler. That all changed on Saturday when I headed south to check out the Great Lakes Super Sprints and winged 410 sprint cars.

Tim Wilber’s efforts to revitalize the facility is what drew me to Butler on Saturday. Being one of Butler’s harshest critics over the years due to track conditions, long nights, and lackluster facilities made staying home to watch a better track online or attending a race elsewhere a better option for me. I can tell you after attending Saturday that I feel better about the track’s future than any other moment in my lifetime.

The amount of improvements Wilber and his staff of have accomplished in just five months is remarkable. Everyone I talked with mentioned how enjoyable it’s been seeing the facility improve week by week.

I spent the first 30 minutes at the track walking the grounds behind the grandstands. New bleacher boards, fresh paint, clean restrooms, and just a general cleanliness about the facility compared to past seasons was evident.

There is still a lot of work to be done, which is something Wilber would admit himself. Wilber is working tirelessly along with his hardy group of helpers to make this happen. The track surface is much better than in years past, but still far from where Wilber and his staff want to see it at. Crash cleanup is lengthy if more than one car is involved because of only having one wrecker on hand. The great thing is I can confidently say when those things are rectified (that’s how much faith I have in Wilber at this point) Butler’s program will be at a level we haven’t seen it at.

Even with the double sprint car program the GLSS feature was done before 11:00 while the 410 sprint car feature was plagued by a number of caution flags that required a fuel stop, yet were rewarded with a spirited battle between Josh Turner and Jason Blonde for the victory.

If seeing Wilber all over the facility on Saturday helping to keep the show moving, it should help expedite those improvements being implemented with Wilber’s infectious energy and vigor.

For example, 12 hours before Saturday’s event turns three and four were completely underwater due to storms that rolled through the area on Friday due to some drain tile work that is still being diagnosed for repair. Wilber, modified and former sprint car competitor Corey Bevard, and others rallied to get the water pumped out so Saturday’s program could happen. It did make turns three and four a bit precarious but considering the amount of water that was removed on Saturday morning the track was in better condition than I expected. 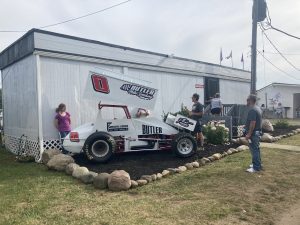 I want to see Butler succeed. Having a well run Butler is best for the website and for sprint car racing in Michigan. Unlike other media outlets that operate more like public relations departments, my coverage and praise are not bought and paid for by any of the facilities or series I cover. I call the balls and strikes as I see them and wouldn’t tell that I feel Butler is in the early stages of an amazing renaissance if I didn’t believe it myself.

I’m very much looking forward to attending another event later in the season at Butler, but even more so seeing what Wilber and the staff at Butler can do with an entire off season at the disposal based on what they have accomplished in a short amount of time this season. If Wilber can sustain this type of effort 10 years from now people that compete at Butler will be proud to say they do so no matter where they go to race in the country.

• The Great Lakes Super Sprints season long points battle took another twist and turn when Max Stambaugh exited the feature on Saturday with a broken shifter cable and Dustin Daggett having to rally for a 8th place finish after starting 18th due to a wild bicycle that saw Daggett bounce every way but upside down during his heat race.

Stambaugh and Daggett’s misfortune allowed feature winner Danny Sams III to extend his point lead to 43 markers over Daggett and 60 over Stambaugh in third position.

When we look back at the 2022 season the two key moments, we could end up referring to was Stambaugh spinning out going for the victory at I-96 Speedway in May and the DNF at Butler as key moments from the season.

As we approach the midway point of the GLSS season seeing which one of this trio of drivers that can minimize mistakes like this down the stretch will be key to winning the 2022 championship. So far Sams has avoided these pitfalls, but there is still a lot of season left to take place.

Moments like this and the racing we saw with GLSS on Saturday makes the series as compelling as the All Stars, World of Outlaws, and other series that have great storylines this season.

• While Jason Blonde has gained more notoriety in sprint car racing for his exploits on pavement, Blonde has not lost his touch on the dirt with a sprint car and specifically wheeling a car around Butler. What started as something fun to do with car owner and former driver Mike Baker with a 2014 Maxim Chassis has now turned into two feature wins for the veteran driver from Litchfield, Michigan.

Blonde patiently stalked Joshua Turner for the lead on Saturday. Turner had the upper hand until the final restart when Turner’s car bottomed out on the front stretch and Blonde streaked by for the victory.

Having Blonde at Butler even part time during this early portion of the Terry Wilber regime is extremely important. Blonde adds some name credibility to Wilber’s efforts, and gives some of the young, blossoming talent that is present at Butler another veteran’s presence to race against.

Years from now as drivers like Boston Mead, Zac Broughman, Trey McGranahan and some of the other young up and coming drivers will benefit from Blonde’s ambition to have a little fun on the dirt again, as well the Butler Motor Speedway itself from having one of it’s most popular drivers back in competition on a regular basis.