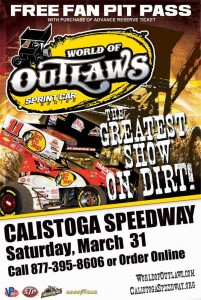 Calistoga, CA – February 18, 2012…The beautiful Napa Valley Wine Country will come alive with the sound of 410 Sprint Cars when the World of Outlaws visit the historic Calistoga Speedway half-mile on Saturday night March 31.

Last season happened to be the return of the “Greatest Show on Dirt” to the Calistoga Speedway following a three-year absence from California’s largest dirt track. The brand new surface created challenges for many of the teams, but racing wise it created as much passing as we have seen in a long time at the facility.

The main event went right down to the wire and saw leader Craig Dollansky run out of fuel coming off the final corner and allowed Jason Sides to narrowly sneak by for the victory. Former Golden State 410 champion Kyle Larson was the hard charger in the feature after coming from 21st to third in the 25-lapper.

This season’s edition of the event will mark the finale of two-time World of Outlaws champion Jason Meyers “Allstar Appreciation Tour” and he will look to cap it off in style at the Calistoga Speedway. The Clovis, California driver has won three main events in his career at the half-mile and was also the 2002 track champion.

Roth Motorsports will feature a pair of drivers, Tim Kaeding and Jac Haudenschild, who have combined for 12 main event victories at the Calistoga Speedway.

Ironically Dennis & Teresa Roth have also visited victory lane 12 times at Calistoga as car owners, which puts them in a tie for second with Vergil Owen on the all-time track win list.


Kaeding last May captured the “Salute to Walt Ross” and by doing so, moved into a tie for 19th on the Calistoga Speedway career win list with Haudenschild, Darrell Hanestad and Ron Horton. The defending King of the West Sprint Car Series champion will be hoping to add one more to the list on March 31.

Likewise Haudenschild will also be gunning to add another victory to his resume at the Napa County Fairgrounds facility. “The Wild Child” has always been a fan favorite at the Calistoga half-mile, much like he is everywhere he goes, but will be looking for his first win at the track since the year 2000.

Twenty-time World of Outlaws champion Steve Kinser and four-time champ Donny Schatz, along with Brownsburg, Indiana’s Joey Saldana and Elk River, Minnesota’s Craig Dollansky look to be the front runners for the series title in 2012. Not surprisingly Kinser holds the most career victories at Calistoga among the foursome, having claimed 10 triumphs.

During the upcoming WOO event Dollansky will be looking to avenge last year’s heartbreak at Calistoga Speedway, whereas Saldana will be trying for his first career win at the track. Schatz has won twice before at the half-mile, including a thrilling victory at the 2005 “Harvest Classic,” where he came out on top of a back and forth duel with now teammate Kinser.

Adult advance reserved tickets for March 31 cost $45 and include a complimentary fan pit pass, which will allow people incredible access to all the stars of the World of Outlaws. General admission tickets will cost $39 with children 12 and under just $10. Tickets for the Calistoga Speedway return are on sale and can be purchased by logging onto http://dirtcar.ticketforce.com/ordertickets.asp?p=200&backurl=default.asp

The Calistoga Speedway is located on the scenic Napa County Fairgrounds in Calistoga, California at 1435 North Oak Street and has been in existence since 1937. For more information on the half-mile log onto http://www.calistogaspeedway.org and for more history visit Bobby Gerould’s Hammerdown USA at http://www.hammerdownusa.com/Calistogacareerwins.html

After the Outlaw event Calistoga Speedway will dark until Memorial Day weekend, when the King of the West Sprint Car Series converge at the half-mile for two nights of action on Saturday and Sunday May 26 and 27. The opener will feature the 20th annual “Salute to Walter T Ross” and Sunday’s finale will mark the return of the “Tribute to Gary Patterson.”