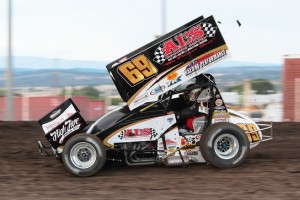 For the second time this season the King of the West 410 Sprint Car Series will venture into the state of Nevada this Friday & Saturday July 5 & 6 for the inaugural running of the “Cherry Bomb Classic” at Reno Tahoe Fernley Speedway. The first event at the Fernley, Nevada based three-eighths mile clay oval in May proved entertaining as the new track configuration created some of the fastest speeds we see on tour with KWS. The racing so far this season on the whole has been as good as it’s been in recent memory, with a number of races coming right down to the wire.

The coming weekend is sure to be pivotal in the points chase and we invite everyone to come and spend your Independence Day weekend with us in Fernley. Don’t forget that there is no sound rule at Reno Tahoe Fernley Speedway so it’s your only chance to hear the King of the West 410 Sprint Cars uncorked with open headers! The main event each night will also pay a very healthy $3500-to-win and $1000-to-start. The event in May attracted teams from as far away as Washington and it is expected to do so once again this weekend.
After losing a main event on the final corner during the previous Fernley appearance, Sacramento’s Kyle Hirst will bring the Roth Enterprises No. 83jr into the Reno Tahoe Fernley Speedway this weekend sitting atop the point standings. The May event opener at Fernley saw Hirst lead 29 & ¾ laps until Rico Abreu was able to take advantage of traffic in the final turns and steal the win away. Hirst will also be looking to rebound this Friday & Saturday after a tough outing at the Placerville Speedway last weekend, in which he finished 13th. The 25-year-old has tallied six top-five efforts in the first nine races of 2013.
Three-time & defending King of the West Sprint Car Series champion Jonathan Allard has closed to within just nine-markers of Hirst for the point lead & is fresh off a thrilling final corner victory last weekend in Placerville. Allard in fact has been the hottest Winged 410 Sprint Car driver in the area during recent weeks, having won his last three starts, including the $20,000-to-win Dirt Cup in Washington on June 22. The Chico native will be looking to continue his hot streak as he heads back to the site of his first KWS win of the season that came in May.
Sacramento’s Willie Croft has a pair of wins this season and comes into the weekend just 24-points out of the lead and only 15-digits back of Allard for second. The driver of the Tri-C Machine Sprinter has been one of the most consistent throughout the first nine events, having claimed six top-five finishes thus far. In May Croft brought home a pair of third place finishes at the Reno Tahoe Fernley Speedway and this weekend will be looking to give car owners Clyde & Marion Lamar another win.
Former Rebel Cup Series champion Craig Stidham has moved to fourth in points going into the Reno Tahoe Fernley Speedway this Friday & Saturday. The Fresno veteran looked very impressive at the track in May and scored a fourth place finish during opening night, along with setting fast time and winning the dash. Stidham will be searching to get into victory lane this weekend for the first time in 2013 with the King of the West 410 Series. The 2001 “Trophy Cup” champion scooped up his first career series win last season.
Another close point battle to watch for at the Reno Tahoe Fernley Speedway will be the fight for sixth, which sees National Sprint Car Hall of Famer Brent Kaeding, former Golden State/ King of the West 410 Series champion Jason Statler and Sydney, Australia native Peter Murphy separated by just 15-points. Kaeding is coming off his best run of the season in Placerville where he finished third in the main event and looked very strong late in the race. Statler in May at Fernley brought home a pair of sixth place efforts and Murphy scored a fifth place finish at the track during the final night in May. The veteran trio will be looking for their first King of the West wins of the season respectively this weekend to help move up the ladder.
Rounding out the top-10 in KWS points going into the “Cherry Bomb Classic” are Auburn’s Richard Brace Jr. and Oakhurst’s Doug Gandy. Brace is coming off a hard crash in the main event at Placerville last Saturday, but is expected back in action at Fernley, where he brought home an 11th place finish in May during opening night. Gandy is fresh off his best finish since returning to the seat of a Sprint Car a few years back. “The Mongoose” tallied an eighth place result at Placerville last weekend after starting 19th, bringing back a glimpse of the days gone by.
After tying his career best King of the West 410 Sprint Car Series finish last Saturday Fresno’s Dominic Scelzi will make his Reno Tahoe Fernley Speedway debut this weekend. The 16-year-old son of former NHRA champion Gary Scelzi scored the hard charger award in Placerville last week by carving his way from 18th to fifth in the feature. Scelzi has been very impressive in what is just his second season of driving a Sprint Car. KWS regular Geoffrey Strole earned his career best series finish last Saturday in Placerville by crossing the stripe in ninth after starting 21st on the grid. The Fresno State student is in his second year of competing with the series and continues to improve with the track time.
More drivers expected to tackle the three-eighths mile oval this Friday & Saturday will include Grass Valley’s Carl Droivold, who sits just on the cusp of the top-10 along with Fair Oak’s Chad Compton, Grass Valley’s Pat Harvey, Elk Grove’s Bobby & Sean McMahan, Auburn’s Andy Forsberg, Everett, Washington’s Kevin Smith, Corning’s Bud Walberg, Reno, Nevada’s Mark Tabor Jr, Spark’s, Nevada’s Mike Monahan, Fallon, Nevada’s Rusty Baglan, Australian Michael Cunningham and others.
Following the July 5 & 6 weekend the King of the West 410’s will return to the RTF Speedway on August 9 & 10 during Hot August Nights, September 13 & 14 during the Reno Air Races and on October 25 & 26 for the penultimate event of the 2013 racing season.
When:

The pit gate at the Reno Tahoe Fernley Speedway will open up at noon on Friday and Saturday July 5 & 6, with the front gate for spectators opening at 3pm. Racing at the “Cherry Bomb Classic” is anticipated to get underway around 7pm with cars on the track just before 6pm.

From Sacramento take I-80 East to exit 46 towards West Fernley, Nevada. Follow the road to Highway 95a and then make a right turn into the Reno Tahoe Fernley Speedway Motor Sports Complex. The physical address is 1965 US 95a Fernley, Nevada 89408.

Adult general admission tickets will cost $25. Pre-sale tickets can be acquired by contacting 775-325-8800. More info on RTF Speedway can also be acquired at 775-224-7644. The code to get the special King of the West room rate at the John Ascuaga’s Nugget next weekend is GKWSC. To book rooms online simply visit www.janugget.com

The Reno Tahoe Fernley Speedway dirt track has been in existence since 1999. The overall facility also includes a road course, drag strip, moto cross track, off road course, gun range, paint ball facility and has been tabbed as “Racings Field of Dreams.”

On May 17 & 18 the King of the West Sprint Car Series brought 410 racing back to the track for the first time in seven-years and a completely revamped surface proved exciting. On opening night St. Helena’s Rico Abreu made a final corner charge to the high-side pay off as he got around Kyle Hirst off turn four to claim the thrilling victory. During the finale Jonathan Allard made a lap-13 pass of Cory Eliason en route to his second career Fernley triumph.

The former Golden State Challenge 410 Sprint Car Series competed at the Reno Tahoe Fernley Speedway on two occasions, with those occurring in 2004 and ’06. The inaugural event saw Santa Cruz, California veteran Kevin Pylant race to the win driving his father Don’s No. 14p machine. The event in ’06 then featured defending King of the West 410 champion Jonathan Allard dominating the main event en route to victory aboard the Morrie & Katie Williams No. 0 mount.

Top-15 in driver standings after nine rounds of competition:

Winners so far this season with the King of the West 410 Sprint Car Series:

Upcoming King of the West events:

On Saturday July 13 the King of the West 410 Sprint Car Series will be in action for the only time this season at the Ocean Speedway in Watsonville during the third annual “Howard Kaeding Classic.” The event has been a very successful one over the last two years and will be another much anticipated night on the schedule. The Ocean Speedway is located on the Santa Cruz County Fairgrounds, two miles east of Watsonville, California on SR 152. The physical address is 2601 East Lake Ave, Watsonville, CA 95076.

The King of the West 410 Sprint Series will then get ready for its second event of the season at John & Donna Soares’ Antioch Speedway on Saturday July 20. The night of competition will also be the final visit of the year to the one-third mile clay oval that always provides thrilling moments. The KWS Winged Warriors kicked off the season at Antioch on April 20 with Willie Croft coming out on top over Rico Abreu & Kyle Hirst.

On Saturday July 27 the King of the West 410 Sprint Car Series will make its return to the popular Santa Maria Speedway for the first time in two years. With its coastal climate the track is always a favorite stop among teams and fans alike, especially during the heat of summer. In 2011 the King of the West Series competed at the Santa Maria Speedway on two occasions, with the first being captured by Andy Gregg and the second won by Jonathan Allard. The victory for Gregg marked his first career Golden State/ King of the West 410 triumph.