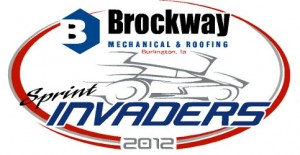 Burlington, IA — (August 17, 2013) — On the “Night of the Twins” for the Brockway Mechanical & Roofing Sprint Invaders, Joey Moughan and Russ Hall were the show.  Moughan swept his heat the Dash and the first feature, while Hall put on a show in the second main event, winning from the 17th starting spot at the 34 Raceway in West Burlington, Iowa.

After winning his heat and the Dash, Moughan, of Springfield, Illinois, drew a two to start outside row one of the first feature aboard the Wilson Brothers Motorsports #15m.  The only caution in the 20-lapper flew on lap five, for a slowing Matt Krieger.  Moughan stormed away on the restart ahead of Miranda Arnold, Dustin Selvage, Russ Hall and Paul Nienhiser.

While Nienhiser, who won the season opener at 34 Raceway climbed to third by lap 13, Hall was close behind him and took the spot on lap 16.  He would grab second from Arnold two laps later, but Moughan had a straightaway lead, and captured his second Sprint Invaders win at the 3/8-mile oval and fourth overall with the series.  Hall was second ahead of Arnold, Nienhiser and Josh Schneiderman.  Selvage, Matt Sutton, Justyn Cox, Chris Martin and Jarrod Schneiderman rounded out the top ten.

“Clean air and a good draw really helped us tonight,” said Moughan in Victory Lane.  “I think I’ll go to the casino tonight.  The engine really ran well when I could get it cleaned out.  I struggled when I slowed down.  I can’t say enough for the people who help me: Maxim, DMI, Butlerbuilt, Simpson Race Products, TI64 and all the guys who helped us get here.  We didn’t know if we’d even come today, so this is neat.  I’d pretty much run anything with wheels here at this track.  It’s a great facility.  It has high speed and finesse.  Most tracks don’t have that diversity.”

Amazingly, eighteen drivers finished the first feature on the lead lap, putting Moughan and Hall in row nine on the inversion for the second main event.  Ryan Jamison started outside row one and took the advantage early over pole-sitter Mike Houseman Jr. and Jimmy Davies.

Just past the halfway mark, the only caution of the event came for Krieger’s flat left rear tire.  Jamison led Davies, Justin Newberry, Jarrod Schneiderman and Houseman back to green.  Hall had made his way to seventh, and on the restart passed four cars on the high side.  The start was called back, however, when Arnold slowed with a flat tire.

The high line remained open for Hall on the second try as well, and within three laps, he had Jamison in his sights, passing him for the point to complete lap fourteen.  Jamison retired soon thereafter, while Hall cruised to his first career win in exciting fashion at 34 Raceway.  It was his third career series’ win and unofficially put him 100 points ahead of second place Selvage heading into the season finale.  Davies held onto second, ahead of Jarrod Schneiderman, Newberry and Selvage.  Nienhiser, Moughan, Daniel Bergquist, Houseman and Andy Huston rounded out the top ten.

“The caution definitely helped,” said Hall.  “We had the first restart, and we went to the top and went by three or four of them.  I thought for sure a couple guys would jump to the top on the second restart, but they didn’t.  That was the key to our victory, running the top and them running the bottom.  This Schnee chassis has been incredible all year.  It’s been flawless.  I have to thank my crew.  They worked their tails off, especially after the first feature.  With our 2014 season kind of in doubt, I hope things like this can turn some heads for us and we can get some help.”

Joining Moughan as heat race winners were Hall, Huston and Selvage.  Krieger won the B main.  John Greenwood was the lone flip victim of the night in heat race number three.  He was uninjured, but done for the night.

The Brockway Mechanical & Roofing Sprint Invaders conclude their 2013 campaign in their Season Championship at the 34 Raceway on Saturday night, September 21.