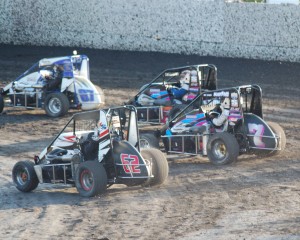 After a disappointing string of bad luck to open the season, McQueen Racing is hitting their stride, most recently claiming a pair of podiums, a win and new track record at Petaluma Speedway on August 10, with team owner Shannon “Lightning” McQueen compiling a recent streak of four consecutive Top five runs and Oklahoma young gun Trey Marcham claiming the win at Petaluma.

McQueen and Marcham return to action this Thursday, September 5 at the quarter-mile Silver Dollar Speedway in Chico, as part of the 60th Annual Gold Cup race of Champions, one of the most fabled races on the West Coast, with McQueen chauffeuring the McQueen Racing #7 Spike/Esslinger by Duane McQueen and Marcham manning the same McQueen Racing #37 Spike/Esslinger by Duane McQueen that he raced to victory at Petaluma. McQueen holds the track record, 14.328, set in 2011 at the historic track.

Thus far in 2013, McQueen has three fast time awards, two of which were track records, and eight top-10 finishes and sits sixth in the USAC-Western States Midget overall points and fourth in the Dirt standings, despite not entering any pavement races and a pair of the Dirt races.

McQueen is also the first female owner to boast a win with a female driver when Oklahoma’s Michelle Decker won a USAC Western States Midget Feature in April 2012 at McQueen’s home track of Bakersfield Speedway at the helm of one of McQueen’s potent Spike/Esslinger entries.

McQueen Racing has dedicated the entire 2013 season to Kenny Speck, a McQueen Racing team member who lost his life earlier this year.

Marcham, a senior Engineering student at Oklahoma University made his first-ever Midget win look easy in the McQueen Racing #37 Spike/Esslinger by Duane McQueen, cruising to a commanding straightaway victory in the 30-lap green-to-checker feature at Petaluma Speedway last month.

Experienced in Micro Sprints, Ford Focus Midgets, 360 non-wing Sprint Cars and asphalt Late Models, Marcham has amassed six Championships at I-44 Riverside Speedway in Newcastle, Oklahoma, as well as having claimed both the A-Class and Non-wing A-Mains at the Inaugural Donnie Ray Crawford Memorial/Race4Life in Tulsa in 2012.