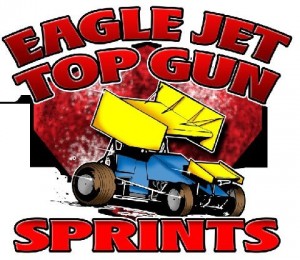 It was made public at the Eagle Jet Top Gun awards banquet that Eagle Jet and Phase 1 Motorsports along with NASCAR’s Nationwide team, JD Motorsports have recognized the professionalism and quality of the drivers competing in the Top Gun Series.

Therefore, it was announced that the 2014 Top Gun Champ will be given two golden opportunities to enhance his or her racing resume. The 2014 Top Gun Champion will be invited to the Eagle Jet Phase 1 Motorsports race shop to be fitted into one of their 2014 Ford Super Late Models. They will then be scheduled for a test and practice session with the car which will be supervised by Phase 1 owner, Doug Elliott. After they have completed the practice day, they will then race the car at a later date for a one race deal. The 2014 Champion gets to keep every dollar the car makes at that race! The second opportunity to help build the 2014 Champs resume gets even better! The Top Gun Champ and a guest will then be invited for an all-expense paid trip, complements of Eagle Jet International, to Gaffney, South Carolina and to the race shop of the NASCAR Nationwide team of JD Motorsports owned by Johnny Davis. This is the home of Landon Cassill and Jeffrey Earnhardt’s NASCAR Nationwide cars. The Top Gun Champ will be fitted to either one of Earnhardt’s or Cassill’s actual race cars for a full day of testing at a local track! This is not just renting a car to go around the track! This is a full blown up to speed real deal test of your ability to drive a NASCAR Nationwide car! The test session will be personally supervised by Mr. Johnny Davis himself. Johnny Davis is famous through his many years with NASCAR for teaching and helping young crew members and drivers get their start in NASCAR. You may visit Johnny and his race team at www.TeamJDMotorsports.com This could be the opportunity of a life time for the 2014 Top Gun Champion to see if they have the “Right Stuff” to drive one of these cars they see on TV. Good luck to each and every one of the 2014 Eagle Jet Top Gun series drivers!