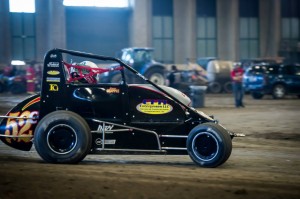 Spending the last few years working on racecars, and getting a feel for what they do, Isaac Chapple and his Chapple Racing team are extremely excited to announce that in 2014 he will follow the USAC National Dirt Midget Series, chasing after their Rookie of the Year title.

Making appearances at the Rumble Series and the Chili Bowl over the winter, Chapple is ready to take the next step in his racing career.

“This is the most racing I have ever had the chance to do in one season and I’m looking forward to being a full time driver this year,” Chapple said. “I’m really excited to get the season started and chase USAC points.  I have been presented with some awesome opportunities and I’m very thankful for them.  Can’t say enough about Joe and Connie at CFH for believing in me and giving me an opportunity to do what I love.”

Making this possible for the Wilkinson, IN driver is the support of CFH Enterprises, owned by Joe and Connie Peacock of Knightstown, IN. For over four years this full service general contractor company has been on board with the team, and they will continue to back them as the schedule ramps up this year.

Aside from midget racing, Chapple will also make his debut aboard a non-wing 410ci sprint car in the Indiana area during the summer months, driving the Goacher Racing No. 7G machine.

Owned by Jason and Traci Goacher of Anderson, IN, the Goacher’s own DECO Machine, and are long time racers themselves, and are extending this opportunity to a young up and comer in Chapple.

I also have to send a huge thanks to Jason and Traci for the opportunity to get behind the wheel of a sprint car and do some more racing,” he continued,  “I am planning on a very successful season in both the midget and sprint car.”

ON TAP: Chapple will now make his Rookie attempt at the USAC National Midget Dirt Schedule kicking of April 11th and 12th in Kokomo, IN.