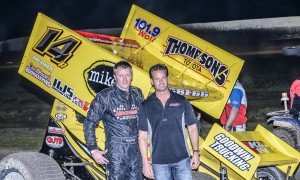 One week after a string of long night’s got Andy Gregg and his Scott Russell team on the track for the Silver Cup, Gregg and company returned to action at Marysville Raceway Park on Saturday night and simply dominated the California Sprint Car Civil War Series Presented By Flowmaster opening event, leading all laps in both the Dash and Feature Event.

“I cannot thank my entire crew for the car that they put under me tonight,” a very jubilant Gregg said in victory lane. “We have ran two races so far in 2014, and we have been extremely fast, and I am excited to win, and very thankful for the opportunity Scott and Kami Russell have provided me with.”

With 33 cars on hand for the series opener, Gregg timed his Mike’s Hard Lemonade/Capitol Ace Hardware/Thompson’s Auto No. 14R machine in third fastest, putting him in the second row of the third heat race with the new Civil War format.

Charging to a second place finish in heat race action, Gregg earned a berth in the new Civil War Dash, where he pulled the one-pill, and started the six-lap event on the front row.

Getting the jump in the Dash, Gregg would lead all six-laps, earning the win, and the right to start the 30-lap feature event on the pole.

Starting alongside Alissa Geving, Gregg was hard on the throttle when the green light’s flickered and jumped to the early lead, only to see the caution fly.

Back underway Gregg again got the jump as he motored away from the field on the very rough and tricky surface, but the Placerville, CA driver looked to be in a league-of-his-own as he navigated through some tricky ruts.

Though numerous cautions bunched the field up, and put the field in double-file formation for restarts, Gregg remained flawless, though at one time in lapped traffic, Geving was able to challenge, but he was too good on this night, and went on to earn the very popular main event.

“The way the track was I kept telling myself to hit my marks, and not make any mistakes,” Gregg added. “The last restart I had Sean Becker next to me, and I really focused on not making any mistakes, and it worked out.”

ON TAP: Gregg will return to action on Friday night for the FVP Shootout at the Stockton Dirt Track aboard the Russell 14R.