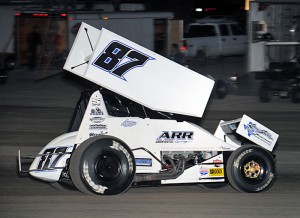 Clute, TX — (March 25, 2014) — This past weekend’s Devil’s Bowl Spring Nationals may have been cut short, but Lucas Oil ASCS National contender Aaron Reutzel didn’t let that bother him as he still came away with a pair of strong outings.

Reutzel rallied from deep in the field to post another top-ten finish aboard the Stafford Performance-powered Bob and Christie Miller’s Car Parts Machine/Wren’s Motorsports No. 87 Triple-X in Friday’s Devil’s Bowl prelim and then made a quick jaunt south to post a runner-up finish in a $2,500-to-win tilt at Bronco Raceway Park after Saturday’s Devil’s Bowl postponement.

Reutzel and the Momentum Racing Suspensions/Danny Sander Construction/ButlerBuilt team will be back in action for the conclusion of the Devil’s Bowl Speedway Spring Nationals in Mesquite, TX, this Saturday.

“I was actually kind of glad they cancelled on Saturday, our new motor will be in by this weekend and then maybe we can do something in our heat races,” Reutzel explains.

Starting at the tail of another heat race in Friday’s Devil’s Bowl card, Reutzel found himself third row outside in a “B” Main where he easily raced to his second “B” Feature win in three ASCS events aboard the Lone Star Hydro Maintenance/BC Fundz/Wright Way Logistics machine.

Starting 18th in the night’s main event, Reutzel quickly moved his way forward and ultimately crossed the stripe ninth to finish among the top ten for the third time in a row and sixth time of 2014.

“We were really good, it was just one of those deals that we started too far back again,” the Clute, TX, racer explained.  “I felt like we had a top-five car.”

Reutzel maneuvered through traffic rapidly in the early going.  “I had no problem passing anyone, I was able to just set ‘em up and pass them coming off the corner.”

“Then we got to Greg Wilson,” Reutzel explains.  “He made it almost impossible, he made his car as wide as he could.  It was getting late in the race and it just wasn’t worth the risk so we just took what we had.”

Come Saturday and word of Devil’s Bowl postponement to March 29, Reutzel jumped in his vehicle and headed south a couple hundred miles for a weekly event at Bronco Raceway Park in Cleveland, TX, that offered up $2,500 to win by the time Reutzel arrived.

For Bronco festivities, Reutzel took the wheel of J.J. Simmons regular ride.  “They wanted me to drive the car and help them figure out a few things.”

Mission accomplished, as Reutzel raced from seventh to third in his heat race and then from eighth to finish second behind Channin Tankersley in the “A” Main.

“They do their lineups off point average,” Reutzel comments.  “We hadn’t been there before and Channin had, so we had to start behind him and try to chase him down.”

“The track was different than it was as 105 Speedway, it’s not really clay but it’s not gumbo either,” Reutzel comments.  “It started with everyone on the top and built some dirt up on the wall and then about halfway through the bottom came in all of a sudden.”

Reutzel worked his way up to second, but had nothing left for Tankersley out front.  “He was about a half straightaway ahead when I got to second but we didn’t have anything for him,” Reutzel says.  “Maybe if we’d had a restart and if he had gone to the top we might have had a shot, but he was better than what we were.”

Making the most of a Devil’s Bowl rainout, Reutzel rolled with the punches explaining that, “We got to head home then stopped off and raced, so it wasn’t all bad.”

Adding another ASCS National Tour top-ten and a runner-up finish at Bronco doesn’t hurt either.  “We’re starting to build up some momentum, that’s what we’ve been needing.”

Up Next: The Devil’s Bowl Speedway Spring Nationals in Mesquite, TX, featuring the Lucas Oil ASCS National Tour concludes this Saturday night with an ASCS Gulf South double at Battleground Speedway in Highlands, TX, to follow on April 4-5.

Keep Track:  Keep track of Aaron Reutzel’s on track-action including schedule and results at http://www.aaronreutzelracing.com/, on Facebook at https://www.facebook.com/pages/Aaron-Reutzel-Racing/117666254913127 or on Twitter at @AaronReutzel.  You can also e-mail Aaron at aaronreutzel@yahoo.com.