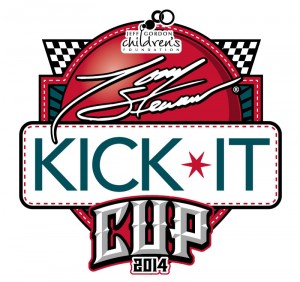 “I love going to the Knoxville Nationals and to be part of such a great event like the Kick-It Cup will make it even more fun to be there,” said Tony Stewart, primary sponsor of the event. “I love racing, whether I’m driving a Cup car, a Winged Sprint Car or a go-kart. Being able to race against fans at Slideways Karting Center and help out the Jeff Gordon Children’s Foundation at the same time is a win-win for everyone. I’m looking forward to getting a little sideways for a good cause and a great time.”

In addition, a one-hour Fan Fest from 11am until the first pitch, will include a Legends of Sprint Car Racing autograph session, featuring Rick Ferkel, Shane Carson, Bobby Allen, Kenny Jacobs and others, a longest-kick contest for the kids, music, food and more.

A live and silent auction will take place throughout the Fan Fest and following the Tony Stewart Kick-It Cup. The auction will feature autographed racing items from both sprint car racing and NASCAR as well as once-in-a-lifetime opportunities for diehard racing fans.

For more information on the kickball game and auction, including confirmed players and auction items, please visit http://www.kick-it.org/games/2014/08/3rd-annual-tony-stewart-kick-it-cup.

From now through the FVP Knoxville Nationals, updated information on both events can be found at the aforementioned websites and on Twitter @TSKickItCup. Sponsorship opportunities are available for both the karting event at Slideways Karting Center and the Tony Stewart Kick-It Cup kickball game at Young’s Field. Contact Kendra Jacobs, kjacobs@spiresportsinc.com, for more information.