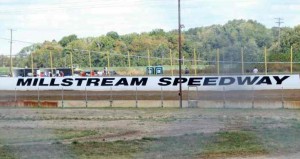 Findlay, OH — (October 21, 2014) — The Renegade Sprints will headline the return of sprint car racing to Millstream Speedway in 2015.

Randy and Lisa Hammer recently became the promoters of the half-mile track, which has been dormant for much of the past three years. The Hammers will operate special events only at Millstream Speedway, including several Renegade Sprints races.

“There’s no doubt in my mind that (Renegade Sprints President) Shane Helms and everyone at the Renegade Sprints are going to succeed,” Randy Hammer said. “Everything I see is positive and headed in the right direction. We want to run several races with them next year.”

Hammer added that the Renegade Sprints dates will be decided in the near future and a schedule will be released this off season.

“We are excited to have Millstream Speedway reopening and booking Renegade Sprints events in 2015,” Helms said. “Randy and Lisa will do a great job. I think they are great people as well and we look forward to working with them.

“I grew up at Millstream Speedway. When I was about as high as a nerf bar my dad would take me to that race track. I raced against Jeff Gordon, Sammy Swindell, Brad Doty, Steve Kinser, Jac Haudenschild, Jack Hewitt and Rick Ferkel to name a few. I got my second career feature win there. My dad has several track championships and many wins there. So it’s a special place to me and my family.”

The Renegade Sprints will return to action this Friday and Saturday at Atomic Speedway in Chillicothe, Ohio, where the season will wrap up with the $15,000-to-win Open Wheel Championships.

Friday and Saturday at Atomic Speedway in Chillicothe, Ohio, for the Open Wheel Championships