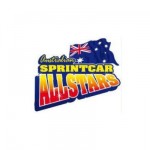 Bogucki lead flag to flag with Williams gaining on him each lap when the traffic started to take effect. Doing the same to Williams was Farrer running a close 3rd.

Williams showed his nose to Bogucki but the pass didn’t eventuate. Farrer then did the same to Williams and got the move completed with only 2 laps remaining.

V74 Michael Cunningham was running in 4th for the major part of the race only to have his right rear tire expire in the dying stages of the race. V4 Phil Lock took advantage of this and slipped into 4th with V83 Chris Solomon 5th. Solomon had a brilliant drive starting in P13.

V69 Colin Barker took a tumble in Turn 1 at the start of the A which put him on the infield for the rest of the show. The Nyora track wasn’t very forgiving on tyres in the A with rubber being laid by both right rear & left rear’s.