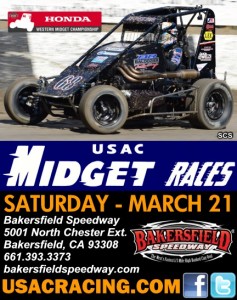 Gardner hopes to be the first driver to claim a third consecutive championship since Sleepy Tripp achieved the feat in 1990-1991-1992.

Trey Marcham, who finished second in last year’s standings, has won the last two features at Bakersfield, taking both races in 2014. Gardner won one of the two races there in 2013.

The race is the first of two for the Western Midgets at the one-third mile Bakersfield dirt. The series returns there September 19.