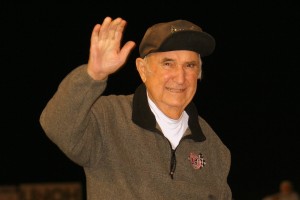 Rossburg, OH — (March 23, 2015) — Earl Baltes, the founder and longtime promoter of Eldora Speedway in Rossburg, Ohio, passed away this morning at Miami Valley Hospital in Dayton, Ohio. He was 93.

He is survived by Berneice, his wife of 67 years; daughter, Starr, and her husband, Joe Schmitmeyer; son, Terry, and his wife, Dee; beloved sister, Susie Barga, and six grandchildren and 12 great-grandchildren.

Baltes built Eldora in 1954, first as a quarter-mile before shaping the track into its popular high-banked, half-mile oval configuration in 1958. Since then, it has become the premier dirt track in the United States. Under Baltes, the facility began hosting the highly successful Famous World 100 for Dirt Late Models, now the largest dirt race in the world, and the Dirt Late Model Dream, the richest dirt late model race in the world. A fan of sprint car racing, Baltes took great pride in his fabled Kings Royal Weekend for World of Outlaws Sprint Cars and many United States Auto Club (USAC) events, including the Four Crown Nationals.

Races at Eldora were shown on ABC’s “Wide World of Sports” with Keith Jackson and Al Michaels as broadcasters. ESPN, CBS and TNN also televised events that helped put Eldora on the map. Despite the track’s growing popularity, Baltes kept ticket prices affordable and concessions costs low, which continued to attract fans from around the world.

Baltes built the track, nestled in rural west-central Ohio off Route 118, into a showplace for dirt motorsports, increasing the seating capacity to more than 20,000. Baltes was beloved by many fans and seemed to know all by name. He also was a great storyteller who always had a joke to tell. And he always had wild ideas that made them wonder: “What will Earl do next?” He hosted three sprint car races in the 1960s that featured 33 cars and were 500 laps. He ran a season-long promotion featuring a series of skits with a family of randomly appearing apes eventually married in a ceremony presided over by legendary driver Duane “Pancho” Carter.

The pioneering promoter developed a relationship with the late Bill France Sr., assisting the founder of NASCAR with recruiting cars for the inaugural event at Talladega (Ala.) Superspeedway. Baltes and Eldora also maintained close ties with the Indianapolis Motor Speedway. IndyCar legends, whose barnstorming schedules at fearsome tracks like Eldora earned them their shot at the Brickyard, and Tony George, former Speedway president and CEO, were frequent visitors during Baltes’ tenure.

Fond of saying, “If we could sell just one more hot dog, we’d break even,” Baltes worked on all measures of Eldora during his time. He also promoted other speedways in Ohio, including those in Dayton, New Bremen, Limaland, Millstream, Mansfield, Pleasant Hill and Powell, while also promoting one in Salem, Indiana. He also promoted World of Outlaws events in Florida and founded Ohio Sprint Speedweek for the All Star Circuit of Champions.

In 2004, Baltes began to think about selling Eldora. Despite several suitors, he reached out to a driver whose style he had always admired, three-time NASCAR Sprint Cup Champion and former Eldora driver Tony Stewart. The sale was completed in the fall of 2004.

Baltes continued attending Eldora’s events with Berneice, often receiving the loudest ovation of the evening when introduced to the crowd. Thanks to Stewart, there is a life-size statue of the two founders at the entrance of the facility.

Baltes was much more than a race promoter. He was born in Versailles, Ohio, and served in the U.S. Army during World War II. Before he started in racing, he was big into the music business. Before WWII, he formed and led the Melody Makers, a 16-piece band that rose to regional prominence. And then in the later 1940s, he built Crystal Ballroom near Versailles while continuing to perform.

The purchase of Ma Shoe’s by Baltes in the early 1940s got Eldora started. He bought the dance hall before he even saw an auto race. One day he caught a race at New Bremen and, without any knowledge of the sport, decided he was going to build a track in the natural amphitheatre that separated the dance hall and the Wabash River. The now named Eldora Ballroom is still there, while the racetrack has grown into national treasure.

Baltes and author Dave Argabright documented his memoirs in the book “Earl!” published in 2004.

“Earl was the yardstick other track promoters measured themselves by. He constantly raised the bar, and he did it by creating events everyone else was afraid to promote. He did them himself, too. Not as a fair board, or a public company, or with major sponsors or millions of dollars in TV money. He put it all on the line with the support of his family. He and his wife, Berneice, created a happening at Eldora. They turned Eldora into more than just a racetrack. They made it a place to be. They were integral to the evolution of dirt-track racing and the sport as a whole. Earl will be missed, but he won’t ever be forgotten because of his devotion to auto racing.”

Services are being planned by the family, and information will be distributed by Eldora Speedway when complete.