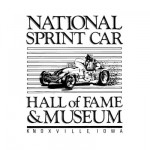 Knoxville, IA — (April 28, 2015) — “National Sprint Car Museum Madness 2” will take place on Friday, May 29, at the National Sprint League (NSL) sanctioned event at the Randolph County Raceway in Moberly, Missouri. On-hand representing the National Sprint Car Hall of Fame & Museum in Knoxville, Iowa, will be NSCHoF inductee Bill Utz, with his famed Ol’ Yeller sprint car. Along with Bill’s number 56 machine will be the late Ken Taylor’s restored number 96 super-modified, as brought to the track by museum supporter Chuck Hines.

Said museum executive director Bob Baker today, “Missouri sprint car fans will want to come out and support this winged 410-cubic-inch sprint car event at Moberly on May 29. As an added value, we will be hosting Bill Utz of Sedalia and two famous open-wheel race cars in Show-Me State history. And we will be giving away hundreds of museum souvenirs on that Friday. The non-profit National Sprint Car Hall of Fame & Museum in Knoxville is thrilled to be partnering with the new National Sprint League on this event at the Randolph County Raceway and six others in 2015.”