DODGE CITY, Kan. (July 6, 2016) – Jack Dover won the opening night of the Steve King Memorial last Friday to give him a victory during each of the past four weekends.

“We definitely have things rolling now,” he said. “I think we could have swept the weekend if we didn’t have a mechanical problem during the finale.” 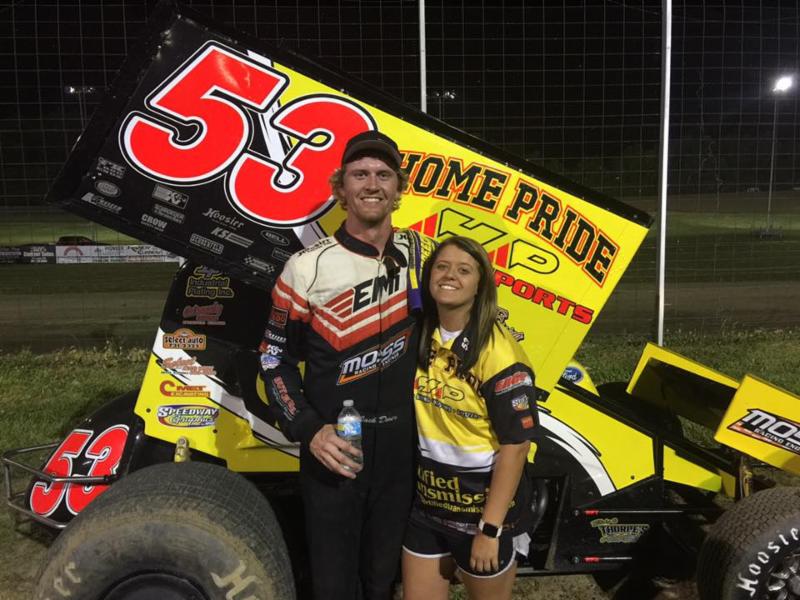 Dover opened the two-day NCRA event at Dodge City Raceway Park on Friday by charging from seventh to third place in a heat race. That lined him up on the inside of the second row for the main event, but he didn’t stay there long.

“The car was perfect and the track was in good condition,” he said. “Anywhere I went my car would stick. Whenever it’s like that it’s fun to race. Once we got around Tony Bruce Jr. for the lead we took off. I think we’ve won a part of the Steve King Memorial race three years. We won the finale twice and the prelim night this past weekend.”

Dover nearly duplicated his success during the finale, which was postponed a day because of rain. He powered from seventh to third place in a heat race before maneuvering from sixth to fourth place in a qualifier. That lined him up on the outside of the front row for the $10,000-to-win main event.

“We got in front of Brad Loyet for the lead one time on the first or second lap,” he said. “He slid me back and we rode in second until about Lap 12. We started catching him and I was going to start using my tires about halfway. Once we caught up to Brad the motor let go. I should have pulled the motor out because it had 25 nights on it and we had a fresh one in the trailer. I take full responsibility.”

Dover was unable to finish the race and he was credited with an 18th-place result.

He also piloted a 305ci sprint car for Chris Roseland both nights. However, the team faced mechanical problems that resulted in DNFs both nights.