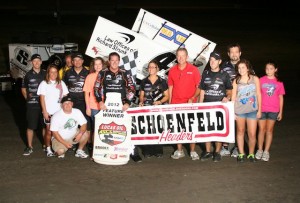 “Logan [Forler] was going to win that race hands down. I just couldn’t get by him. I could get to him but every time I’d get close to him it would just knock the wind off my wings” commented Johnson. “He just got indecisive where to go on the restart and kind of slipped up a little bit in turn two and I was able to get by him”

Taking off from the fourth position, Johnson would ride just outside the podium with Brady Bacon in tow for the first nine circuits, moving by Wayne Johnson for the show position on lap ten.

Jumping to the lead from the start, Logan Forler would begin to encounter the back of the field by lap eleven.

Working to clear slower cars, the hurried Lucas Oil No. 5h would unintentionally make contact with the No. 94 of Blake Hahn; sending the Sapulpa, Oklahoma racer flipping off the top of turn two. Forler was very apologetic in his post-race interview and did provide tools for the Hahn team to put the car back together in order to get down the road.

Restarting with eighteen laps remaining, Forler would be chased to the green by Brad Loyet, Jason Johnson, Wayne Johnson, and Derek Hagar. Jockeying for the runner up spot, the Vacuworx International No. 05 of Loyet would trade several slide jobs with Johnson before the MVT No. 41 secured the runner up spot on lap sixteen.

Taking off into another round of slower cars, Johnson would ride six car lengths behind the Lucas Oil No. 5h. With traffic forcing Forler to slow up, Johnson would get close but couldn’t complete the pass.

Running third, Wayne Johnson would begin to close in on the battle for the race lead. Making up nearly a straight-a-way with only ten laps to run, Wayne would get his chance to battle for second with ten laps to run. With both drivers pounding the cushion, momentum would be key but just as Wayne looked to have the run a shredded right rear tire would send the City Vending No. 77x hard into the outside wall exiting turn four. Wayne would return before heading pit side before the restart.

At the same time, the red would be called for as Derek Hagar sailed the Xtreme Race Graphics No. 9jr off the top of turn three. Hagar landed and luckily stayed up right for the duration of his flight. The Marion, Arkansas driver would not return to the track.

Restarting for the final five laps Forler would dive low into turn one, leaving the high line wide open with Jason Johnson screaming around the cushion. Pulling wheel to wheel entering turn three Forler would have no choice but to stay low, allowing No. 41 to take the top spot on lap twenty-six.

With the cruise control set, Jason Johnson would pull to a straight-a-way advantage before the checkered flag fell. With the win, Johnson also reclaimed the points lead by three markers, marking the tenth time in 2012 that Jason and Wayne Johnson have swapped the points lead.

Logan Forler earned his best finish of the year with second with Brad Loyet taking third after falling back as far as sixth while trying to keep his engine from melting down.  Johnny Herrera climbed from tenth to fourth with Brady Bacon rounding out the top five.

Dustin Morgan was sixth with Seth Bergman seventh. Despite a damaged front wing Mike Goodman held on to eighth after starting fifteenth with Gary Wright and Brandon Hahn completing the top ten.

The Lucas Oil ASCS presented by MAVTV heads next to I-30 Speedway in Little Rock, Arkansas on Saturday August 25th.

Additional information regarding the American Sprint Car Series is available at www.ascsracing.com as well as Twitter and Facebook.