Hometown hero Dave Darland, who actually lives in nearby Lincoln, Ind., enters this week’s 2nd “Sprint Car Smackdown” at the Kokomo (Ind.) Speedway as one of the favorites and hopes to protect his tenuous AMSOIL USAC National Sprint Car point lead over Bryan Clauson which stands at just five points. 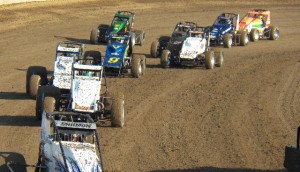 The three-night extravaganza (Thursday-Friday-Saturday) will be pivotal in the 2013 point race, with five drivers separated by just 76 points and over 200 total points up for grabs at Kokomo.

Clauson would appear to have an edge at Kokomo, winning both last year’s “Smackdown” and one of the prelims. The other prelim went to Chris Windom, who is ninth in the latest series standings.

Clauson has three victories this year and Darland has two. The 2013 victory leader is Kevin Thomas Jr., who won at Kokomo during “Indiana Sprint Week” and is fourth in the points after recording six feature wins this year. Brady Bacon is third in the points with one win this year, while Chase Stockon, fifth in the standings, is still seeking his first 2013 win.

Tracy Hines and Jon Stanbrough each two 2013 wins, while other winners this year have been Daron Clayton, Shane Cottle and Chad Boespflug.