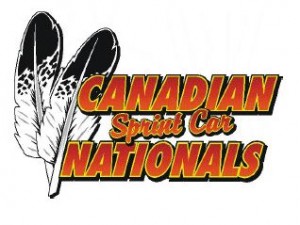 Ohsweken, ON — (August 26, 2013) — The 9th annual Canadian Sprint Car Nationals weekend at Ohsweken Speedway is coming up next month, and preparations are well underway for the track’s signature event.

This year’s “Night Before the Nationals” includes Twin 15 lap features for the Sprint Cars, plus the TJSlideways.com Ohsweken Shootout, Dave McLeod Memorial “Mr. Sprint Car Challenge” 1 on 1 match races, and the HRW Automotive Mini Stock division with a 20 lap feature. Each Twin 15 winner will be guaranteed starting spot in the Canadian Sprint Car Nationals A-Feature. The TJSlideways.com Ohsweken Shootout features drivers who have qualified from the Empire Super Sprints, Patriot Sprint Tour, and Southern Ontario Sprints challenge events held at Ohsweken in 2013, the Corr/Pak Merchandising Sprint Car feature from August 9, plus the top drivers from Sprints on Dirt and the National Racing Alliance.

The 9th annual Canadian Sprint Car Nationals will include group time trials, 6 heat races, 3 B-Main races, a Dash race for the heat race winners to determine the top 6 starting positions in the A-Feature, the 15 lap “Little Feature”, and the 35 lap A-Feature which will pay the winner $12,000 from the lucrative purse. The Affordable Towing & Recovery Thunder Stocks will be the support division for the Sprint Cars on Saturday, September 14.

PRE-ENTRY DEADLINE – SEPTEMBER 1ST, 2013
The deadline for competitors to register and pay the discounted entry fee is September 1, 2013. Entries can be filed by mail, or e-mail, with payment methods including cheque, or credit card (call 1-855-448-3478). Click on the “Competitors Info” link on www.OhswekenSpeedway.com for more information, print the entry form, and to view the rules, format, and more.

20 drivers have already filed entries for the Canadian Sprint Car Nationals, including 2009 and 2010 winner Shane Stewart of Bixby, Oklahoma.

HISTORY
The Canadian Sprint Car Nationals has been the annual season-closing event at Ohsweken Speedway since 2005, and brings together teams from several affiliated sanctioning organizations in the area, plus teams and drivers from all over North America. The event has drawn an average of 71 entries for the 8 previous editions, with a total of 204 different drivers taking part from 14 American states, 5 Canadian provinces, and New Zealand.

Kenny Jacobs of Holmesville, Ohio won the first Canadian Sprint Car Nationals feature in 2005, followed by Steve Poirier from Saint-Mathieu-de-Beloeil, Quebec in 2006 and 2007, Mustang, Oklahoma’s Wayne Johnson in 2008, Shane Stewart of Bixby, Oklahoma in 2009 and 2010, Sam Hafertepe, Jr. from Sunnyvale, Texas in 2011, while Steve Poirier became the first 3-time winner in 2012.

“Night Before the Nationals” presented by Burger Barn general admission tickets for Adults, Students, and Seniors are just $15, while Kids age 12 and under are FREE!

Please visit www.OhswekenSpeedway.com and check out our new system for online ticket sales, call 1-855-448-3478, or purchase your tickets at the track on race nights with your Visa, Mastercard, or Debit card!

STAY WITH US!
Plenty of unserviced camping space is once again available at the speedway all weekend for a nominal one-time fee of twenty dollars. The pit area washrooms and concession stand will also be open twenty-four hours a day during the Nationals, and the concession will feature breakfast and lunch menus.

SUPPORT OUR SPONSORS
About Burger Barn: Burger Barn opened in July 2011 at 3000 Fourth Line, just a few miles from Ohsweken Speedway. The restaurant is owned by Jason Hill and his wife Celestey, and has quickly gained a reputation for large portions, friendly staff, great food, and fair prices. Tips from satisfied customers even led Food Network Canada to feature Burger Barn on their show “You Gotta Eat Here”. Burger Barn takes pride in their product, and they never get tired of hearing “That was the best burger I’ve ever had”. Their menu also includes all-day breakfast, wings, chicken burgers, fish and chips, pulled pork, daily specials, and much more! Visit www.BurgerBarn.ca for more information.

About Arrow Express: Arrow Express proudly presents the Six Nations Showdown and Canadian Sprint Car Nationals at Ohsweken. Contact them by phone at (519) 445-1688, or visit their website at www.arrowexpresssports.com

About Corr/Pak Merchandising: Founded in 1997, Corr/Pak Merchandising Inc. is based in Richmond Hill, Ontario, and is a designer and producer of Point of Purchase (POP) displays for retail. Strong emphasis on creative design and speed of response has seen Corr/Pak achieve great success in a very competitive industry. Their in-house capabilities and broad range of trusted suppliers enable them to develop any sort of effective solution for your retail display needs, no matter the materials used – whether corrugated, wood, boxboard, plastic, wire, steel, or any combination of those. Corr/Pak’s support of the Sprint Car division at Ohsweken continues for a sixth consecutive season in 2013. Please visit www.CorrPak.ca for more information on the title sponsor of Sprint Car racing at Ohsweken Speedway.

About HRW Automotive: HRW Automotive was founded by Robert Workman in 1990, and by providing good old-fashioned customer service, HRW has gained a loyal following in the community. Many hundreds of area residents and businesses have come to depend on the expertise of HRW’s friendly staff to keep their vehicles and equipment in peak condition. You can entrust all of your vehicle’s service and repair needs to the team of automotive professionals at HRW Automotive. HRW Automotive is located at 163 Baptist Church Road in Caledonia near the intersection of Pauline Johnson Road, and just 5 miles from Ohsweken Speedway. HRW’s support of Mini Stock racing at Ohsweken continues for a third consecutive season in 2013. Visit the title sponsor of Mini-Stock Racing at Ohsweken Speedway on the web at www.HRWAutomotive.com, or call HRW today at 519-752-2063, and find out what good customer service is all about!

About Ohsweken Speedway: Founded in 1996, Ohsweken Speedway is a motorsports complex which includes a 3/8 (0.375) mile clay oval track. The facility is owned by the Styres family, and located in the village of Ohsweken, Ontario, Canada. Ohsweken’s weekly Friday night racing program runs from May to September each year, featuring Sprint Cars, Thunder Stocks, Mini Stocks, and Bombers, while the season finishes each year with the annual Canadian Sprint Car Nationals. Ohsweken Speedway also hosts weekly Micro Sprint racing on Thursday nights, and has been a yearly stop on the World of Outlaws Sprint Car series schedule since 2007.