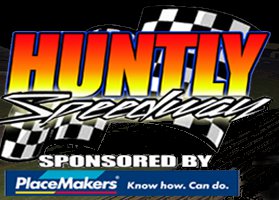 Huntly, NZ — (February 15, 2014) — Saturday night the 800 plus horsepower Sprint cars raced for the Link Up Paint Supplies Waikato Sprint car Champs.  They didn’t disappoint the crowd with their skilful, daredevil driving skills over the group heats and the final. Split into 2 groups and your accumulated points over the heats would give you a grid position for the final. Heat one group one Daniel Thomas blasted to the lead followed by Dean Brindle with Brindle was on the money to within 2 tenths of the Daniel Thomas`s lap record of 12.7 seconds and this was only lap3. Then Brindle done the big bicycle wheel on turn 2 as the track had lots of drive and just about rolled, but carried on to finish second to Thomas with Greg Pickerill third.

Heat 2 was a reverse of placing for Thomas and Brindle leaving this pair top points for group one. James Dahm was third in this heat. Group two was also full of talent with this time Daniel Rogers’s showing good pace to the fast finishing Michael Pickens then Jamie Mc Donald in third. Heat two again was fast with the win going to Mc Donald from Stephen Taylor and third Pickens. Tough luck was on Rogers this heat as coming from the rear of the grid and after fourth place in this heat only to be excluded from the race points for passing over the pole line and causing the car he was passing to spin and out of the points. This meant Rogers would start further down the grid in the final.

Front two rows of the final had 2NZ Dean Brindle on pole from 55A Daniel Thomas, 3NZ Jamie Mc Donald spot 3 and current NZ Midget champ 54A Michael Pickens on grid 4. The final and first time tried at Huntly a 25 lap final. After the four wide salute to the crowd it was time for the gruelling battle. Thomas got a flyer on Brindle and Mc Donald and had established a good led after 7 laps then the caution for the big rollover of 21W Stephen Taylor who rode the top of the concrete wall for 50 metres pass the control tower. On the restart and after 1 lap Brindle tried to pass 2 cars on the outside on turn 3 and came unstuck and hit the wall ending his race as he was closing in on Thomas.  At the restart Thomas`s car failed and went to the infield with electrical magneto issues. Pickens charged to the front at the restart from Mc Donald. 6M James Dahm was pushing Mc Donald for second as the laps run down.  However Pickens was showing

his masterful skill of racing midgets at Huntly by passing cars on the inside and sometimes 2 cars on the outside on his way to the victory. The overall results after 25 laps of the Link Up Paints Waikato Sprint Car Championship were Michael Pickens, Jamie Mc Donald and third James Dahm.