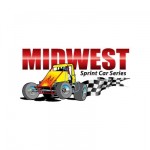 Haubstadt, IN — (December 19, 2014) — The 2015 Hoosier Tire Midwest Sprint Car Series schedule has been formulated, the race dates confirmed, and it is ready to release to the public. There will be 19, probably 20, MSCS sanctioned events which are distributed over a six months period. This is the most ambitious schedule that MSCS has ever released. In 2015 there will be more races and added opportunities! Six different tracks will host events during the season. The first five races will be at five different tracks. MSCS purses range from $2,000 to $3,000 and upwards in paying $4,000 to $5,000 to win. The biggest single MSCS event , the Haubstadt Hustler, will pay $10,000 to the feature winner.

The season is scheduled to begin on Saturday night April 11th with an appearance at Lincoln Park Speedway in Putnamville, IN. The series will once again headline Bill Gardner’s Indiana Open Wheel . Com Racin’ Fest that night. The winner will receive $4,000.

The next weekend MSCS and USAC will join forces to present racing at Bloomington Speedway on Friday April 17th and then at Tri-State Speedway the next night, April 18th. The series will next spring back into action the last weekend of April. The Spring Fling at the Terre Haute Action Track on Sunday the 26th will include the King of Indiana Sprints series battling with MSCS on the half mile. It will be the only half mile track that MSCS will race on during the year.

The MSCS series will be racing at Montpelier Motor Speedway on Saturday night May 2nd. This appearance will take the series North of Indianapolis for the first time in years. MSCS made its only appearance at Montpelier in 2001. Officials are looking forward to this opportunity.

Memorial Day weekend the series will be at Bloomington Speedway Friday night, Lincoln Park Speedway Saturday night, and Tri-State Speedway on Sunday night. Friday night’s event on May 22nd will be the Josh Burton Memorial Race. Saturday will be the traditional Saturday night Special at Putnamville. Sunday MSCS will race at the Memorial Weekend Classic in Haubstadt. The Bloomington and Haubstadt races are KISS races sanctioned by MSCS. All three races will pay $2,500 to win.

Tri-State Speedway will present the MSCS Sprints twice in June. On Saturday June 6th MSCS will be part of the Summer Showdown which also features the Summit Modifieds. On the 27th the MOWA Winged Sprints will split the racing card with MSCS for the Southern Indiana Sprint Stampede. Fans can enjoy watching winged and non-winged sprints on the same racing card.

On Friday night July 3rd MSCS will sanction the racing at Lincoln Park Speedway on the first day of a two day weeked at the track. It will be the third of four appearances at Putnamville during the season. This is another new show and an added opportunity involving MSCS. The Bill Gardner Sprintacular that night will pay $4,000 to win.

The annual Hoosier Sprint Nationals will be at Haubstadt on August 2nd and will pay $5,000 to the winner. This year the POWRi Midgets have been added to that show!

The MSCS Sprints will return to Putnamville’s Lincoln Park Speedway in August with a $3,000 to win event scheduled for the 8th. Bloomington Speedway will be paying $3,000 to win August 14th when the MSCS Sprints return for the second annual Summer Doubler. A race may be held on August 15th. Details could not be worked out in time to meet the earlier release deadline for the MSCS season schedule. An announcement will be made later.

Brownstown Speedway will host it’s very first MSCS event on August 22nd. It will be the third attempt to bring an MSCS Sprint Car show to the fairgrounds oval. If the third effort is charmed MSCS will finally present its first race at the track!

September will be a busy month for MSCS drivers. It begins when they run at Tri-State Speedway Sunday night September 6th in the Labor Day Weekend Challenge paying $3,000 to win. Then they will return to Haubstadt along with the USAC Sprints to participate in the biggest race of the year which is the Haubstadt Hustler on Saturday night September 19th. The top drivers in the nation will be running for a top prize of $10,000 to win.

A September 26th racing date at Tri-State Speedway will include the POWRi Midgets along with the MSCS Sprints. The Class Track Fall Roundup will be a second opportunity for open wheel fans to see both sprints and midgets during the same racing program.

Tri-State Speedway will host the MSCS Season Finale on October 10th. The feature winner will receive the Harvest Cup. The new MSCS Champion and Rookie of the Year will be honored at or following this decisive race.

Kyle Cummins of Princeton, IN, won the 2014 MSCS Championship and the title is once again his to defend in 2015. It was his fourth MSCS series title. James Lyerla of Hillsboro, IL, was named as the 2014 MSCS Rookie of the Year. A new group of drivers will be emerging in the coming season to challenge for Rookie of the Year honors!

Four new race dates have been added to the tour and six race dates have been adjusted to improve the overall schedule. The shows co-sanctioned with USAC or part of the KISS schedule will continue to add to the challenges already facing the drivers at their every appearance. Season FIFTEEN for MSCS begins April 11th. Promoters are offering purse money totaling nearly a quarter of a million dollars over the season.

If any changes or additions are necessary to the schedule, a news release will be issued at that time. Everyone can keep up with MSCS by visiting mscssprints.com. or MSCS Facebook.